I'm a little off schedule w/ the Craft Challenge due to ear infections & a case of strep throat. My niece was sick last week & I kept her. I have a couple of projects that didn't get done on time, but the main problem is photos. I never had daylight hours to take & post pictures. I'll leave you w/ a shot of my henna I had done on International Women's Day.I'll apologise now that the picture was taken in a frozen yogurt shop w/ orange tables. 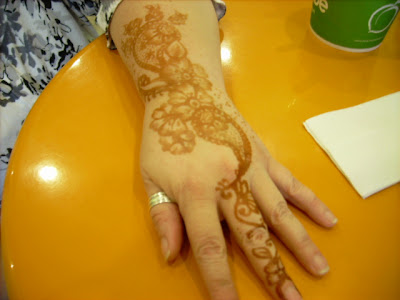 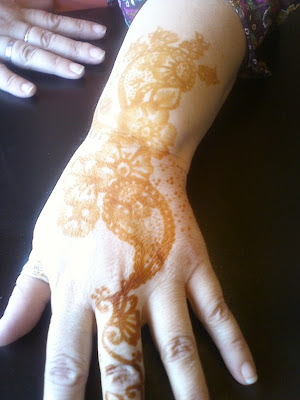 The first photo is on Sunday, the second photo is on Friday, the day after I had it done.You can see how the colour gains depth.
Posted by Unknown at 4:13 AM 1 comment:

Today's prompt calls for a date w/ a beady friend. Our plans fell through, so I will probably work on something on my own. This afternoon I will be attending a Women's Festival & tonight is jewelry class so I will be around creative people several times. I also hope to have pictures of a henna tattoo to share after the festival :)
Posted by Unknown at 11:02 AM No comments: 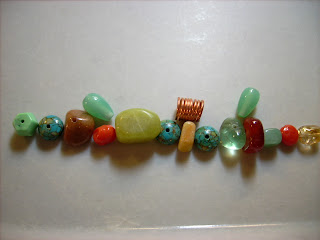 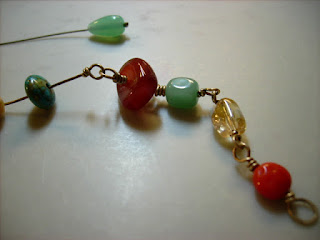 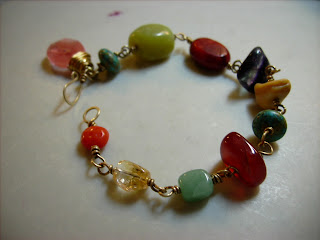 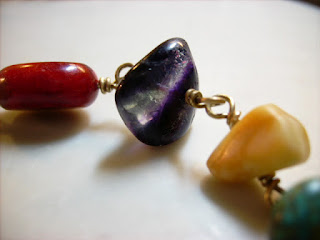 Working w/ a different metal is today's prompt. I chose brass. The 'brassiness' of the colour was knocked down a little w/ some black max. I used one of the colour palettes I put together yesterday. It underwent some changes from colour inspiration to wire wrap piece.I added a couple of beads that weren't in the original mix, a wrapped briolette dangle & the purple stone. It actually came from the middle of a green strand of gemstone nuggets. I tried to get a picture of the clear & green running through the bead.I still like the look of the original palette, I may recreate it for a strung bracelet.
Posted by Unknown at 1:22 PM No comments: 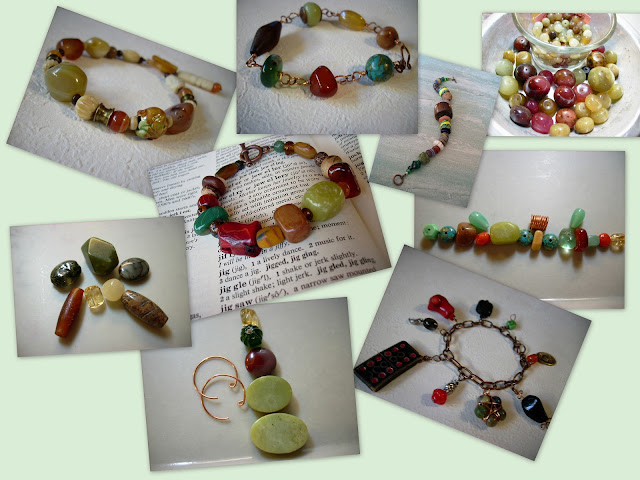 I can't decide if I'm in a rut or just have really established taste!  Photos aren't the best today because the light outside is hazy(smoke from fires) & the wind is so bad I had to stay indoors. Hopefully you get the idea.The bracelet on the book did sell, the others were ones I made to keep. See you tomorrow!
Posted by Unknown at 5:45 PM No comments:

Day 5~Use Chain in your Design 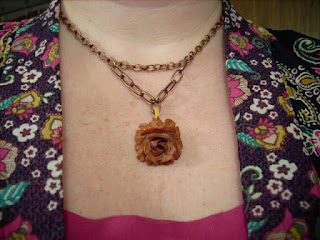 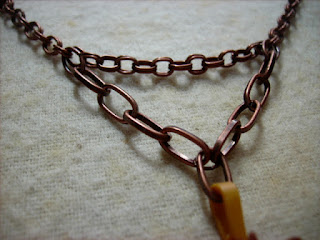 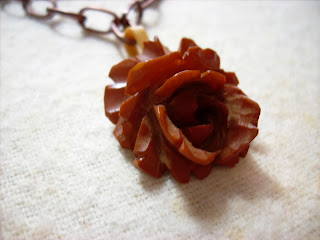 Today's challenge is to "incorporate chain in your design". Easy assignment, I am always trying to use more chain & yesterday's cleanup uncovered lots of chain. I have worn the focal before, strung on suede lacing, but never loved the end result.The focal is something that was in my grandmother's button box. I remember loving & playing w/ it as a child.  I had put it on the bit of leftover chain ages ago & never went any further. When I came across it yesterday I knew this would be the chain challenge piece. I found another copper chain & attached the two w/ copper oval links. I also used a smaller oval link to keep the link holding the focal in place. In the past when I have used this chain this way I have used sari ribbon to keep the links together but I wanted the focus on the pendant.Tomorrow, colour, see you then!
Posted by Unknown at 12:49 PM No comments: 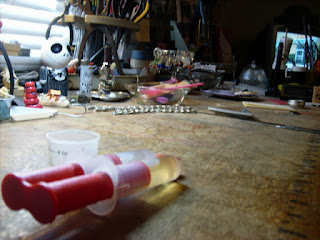 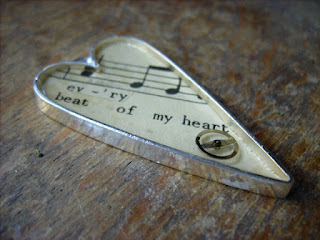 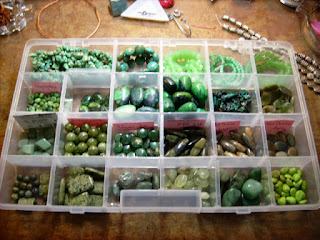 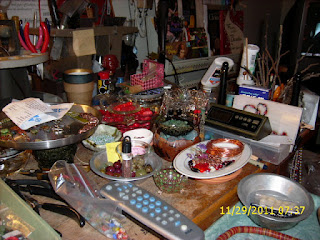 Day 3I poured resin. Everything went %100 smoothly, no bubbles& no paper discolouration. Also, no curing~24 hours later it was still the slightest bit tacky. I have added just a little more for the dome & I hope  this time around it will cure completely. The house is warmer & I think that was the problem yesterday. I already know the dome aspect isn't going to be great because I messed w/ it a touch too much the resin did flow over the edge. All in all I am way psyched about the resin, I don't know why I waited so long to try it! This time around I used Ice resin, but the next round I will use my Envirotex,(I was lucky enough to win some giveaways & had both).
Day 4 was organize your bead area. I started last night about 8:00 & worked through the night until about 11:00 this morning. I'm not through by any means, but I got a lot done. The date on the before picture says November, but it was still that messy. What you didn't see was the six foot table that was also covered w/ trays of beads,(I work on cafeteria trays) projects, ideas, bead show swag & general stuff. You know what I'm talking about. During the clean up I cleared 14 trays & filled two, new 24 compartment storage boxes. I'm feeling pretty good about the progress.Yes, I am a Hoarder(but w/o the human feces & mummified animal remains) it's something I am struggling against. Tomorrow's prompt~ incorporate chain into a design & I found @ least 10 different packages of chains I bought for just that very thing, so I'm set! See you tomorrow.
Posted by Unknown at 2:06 PM No comments:

Today's prompt was to learn a new technique. I poured a bezel & resined some paper. So far the bezel looks great~I'll pour a little more for the dome in the morning. I'm getting a head start on organizing my bead area while I wait for the resin to cure. I hope to have pictures of both challenges tomorrow.
Posted by Unknown at 10:45 PM 1 comment: 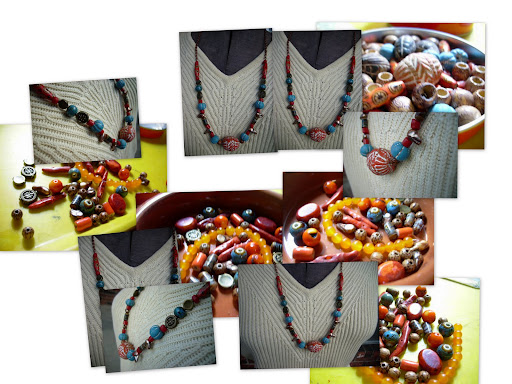 Today's challenge was "leftover beads". I cheated(a little) & used some of a stash I got from Valerie in a mini swap. There were two different bags of beads, one bag came from India(top right) & the other was an assortment. Both were in the same basic palette, one that I never use, & I decided to make that  part of the challenge. The shots of the bowls were slightly out of focus but I wanted to share what I saw  when I was looking for possibilities, the collage feature hides a multitude of sins on this one!(I also promise not to take any more photos on the yellow tray) I made a necklace w/ beads & copper chain. I usually make bracelets so I wanted to stretch a little here.
In other news, jewelry class started last night & I wasn't thrilled but I am going to stick it out & make the best of using a studio w/ fire. I'll keep you updated! See you tomorrow, :D
Posted by Unknown at 4:10 PM No comments: 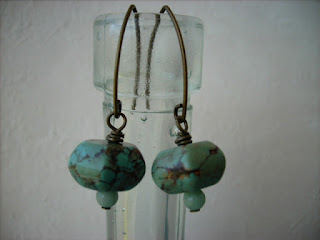 Today's challenge is to make a pair of earrings. I used some lantern beads I got a couple of years ago from a destash sale that Juls had.I'll wear these w/ some of my Everyday JuJu bracelets. See you tomorrow!
Posted by Unknown at 1:08 PM No comments: